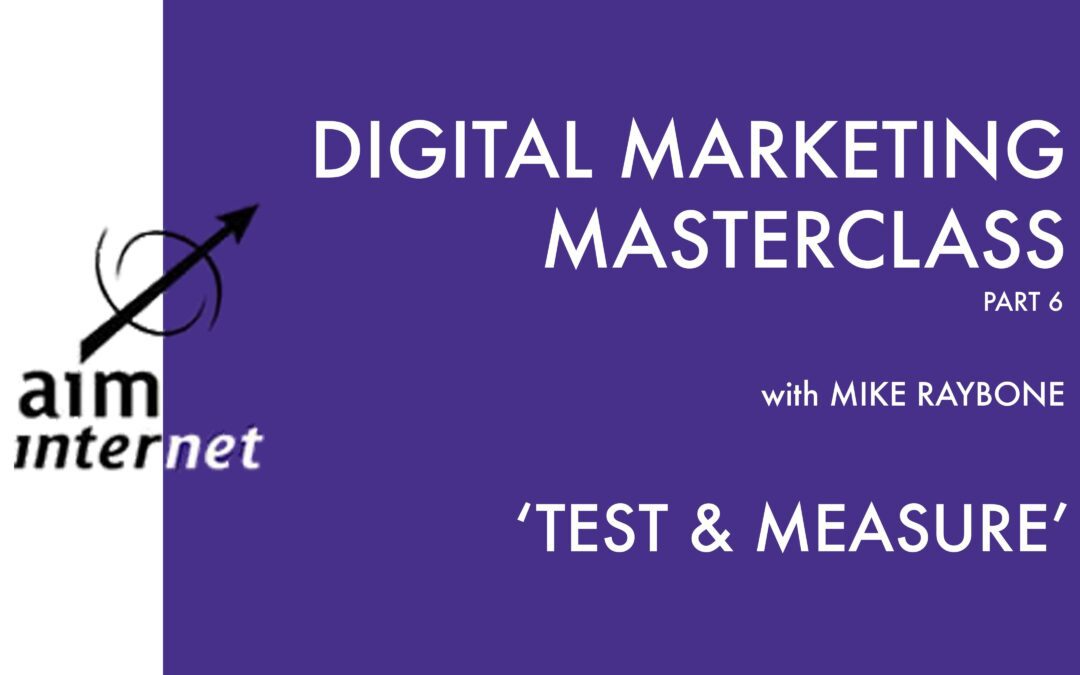 It’s really important that you use a small amount of budget to begin with and you fail quickly. You don’t need that much of a sample to actually get reasonably statistically valid results.

From that, again looking at that sales funnel or conversion funnel whereby you start at ‘is it an email?’ ‘is it social media?’ ‘is it Facebook?’, ‘what’s the page that they go to?’ ‘which creative works, which creative doesn’t work?’ ‘which converts better?’ and ultimately, ‘which converts to a sale?’. Now you don’t have to do this, obviously, you can employ experts to do it on your behalf, but the point is that you’re really making the most of your marketing budget. Because you’re using a small amount to test what works and when you find the thing that does work, then you invest, and you get bigger returns. It’s a simple approach, it’s a simple methodology but it really does work.

Google used to have a great tool called ‘Website Optimiser’, they don’t have it anymore and I’m not quite sure why but, you can derive similar results from different tools. And effectively, we broke a website down and changed five variants – there was an image, we changed a header, we made something white-out rather than black-on, we made something bolder, but we changed five things – and that gave 31 different variants. From that, those permutations of the website, the difference between the best performing sell and the worst performing sell was double, which is quite outstanding when, to the naked eye, apart from the image the website pretty much looked the same.

But it does go to show you that by testing and measuring, even to the point of just changing colours, you can make a significant difference to your results. It really does make sense, and it’s an example of why the data, and analysing the data, is more important than the creative. Obviously, the creative is important, but you need to test which creative works and which creative doesn’t. And going on gut feel – which is what most people do, ‘oh I like this’ or ‘I like that’ – and running with it is passé. To really have the competitive edge, it’s very important that you test and measure all the way down the line.

Then when you’ve got the campaign sorted out, you need to identify the variants of the campaign that you are going to test, and that might be a simple email – just sending out a 5% sample of the email with one set of creative and a 5% email with another. Or even what we’re finding is no creative at all works better than with creative because you’re actually getting past all the firewalls which tend to block images. So, you’re going to get far more better results by using a 10% sample testing which one works, and then sending the balance out to the 90%. Something as basic as that, will get you improved results.

When you start to apply that to a website and where the sources of traffic are coming from, using Google Analytics – which will be the next thing, I would strongly recommend you using Google Analytics or some similar analytics tool – then you’re in a position whereby you can really start to make some intelligent decisions about your marketing.

With Google Analytics, the best thing to do is obviously you apply it to your website, and then look at just the basic dashboard which gives you the number of views, number of individual views, bounce rate, a number of key metrics which you can measure over time. You’ve then got traffic, and the source of traffic, which again will give you percentages of where your traffic is coming from. And then if you use the conversion code, you can then identify which traffics converting and which isn’t. Google themselves now offer a great help service, you can just pick up the phone and ask any questions. But again, if you’re using the right sort of agency, the right sort of consultancy, they should be able to do this for you and work with you to make sure that you’re continually measuring the data over time – because strangely when you measure anything, it improves – to make sure that the metrics are going the right way and as a result, ultimately the profit in your business goes the right way.

‘Because strangely when you measure things, they improve’ I’m not sure which famous guru came up with this, it might have been Bob Townsend or Zig Zigler or somebody, but it’s the basic premise of, if you don’t measure anything you don’t know. If you measure things, then you’ll understand what’s working and what isn’t, and as a result you focus more on the things that work and you cut out the things that don’t. As a result, things improve.

Everyone I’ve ever known who measures, things will always improve – that’s just the nature of the beast.

For SEO purposes, the keyword of this article is Manufacturing Marketing Advice Birmingham. For those of you that use Yoast as an SEO plug-in, you’ll know what I mean.

Lets help you find something..