Spotify Gets Into Social Audio With Greenroom 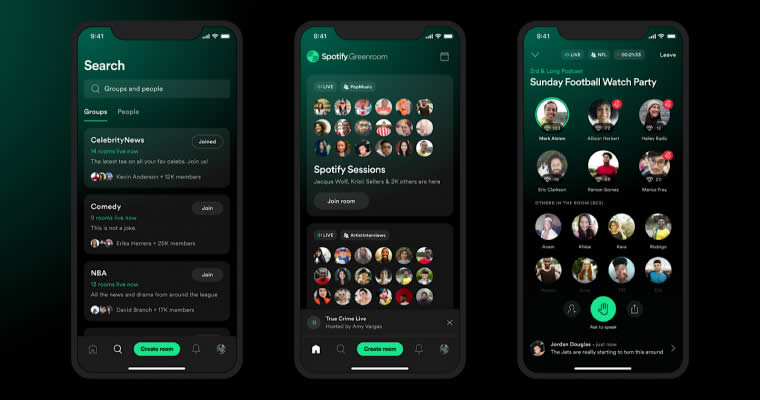 Spotify is now competing in the social audio space with the launch of Greenroom, which offers the option of turning live chats into podcast recordings.

While this is a new product from Spotify, it’s more a takeover of an existing app rather than the launch of something that was built from the ground up.

Using Locker Room’s existing code, the app has been given a fresh coat of paint, and many upgrades, to turn it into Spotify Greenroom.

Anyone who previously had the Locker Room app downloaded will see that it’s now become Greenroom.

No longer catering to just sports fans, Greenroom has a broad range of general interest groups about all kinds of topics.

Here’s more about this new endeavor from Spotify and how it differs from existing social audio tools.

What is Spotify Greenroom? Greenroom allows Spotify users to join and host live audio conversations with groups of people from all over the world.

Users can join Greenroom with their Spotify credentials. Upon initial login, users will be guided through an onboarding process which helps the app tailor content to individual interests.

It offers the same key features as other social audio offerings, such as Clubhouse, Twitter Spaces, and Facebook’s Live Audio Rooms.

Greenroom’s rooms can currently host up to 1,000 participants, and that number may grow as the app matures.

Spotify’s new app isn’t just a clone of other social audio tools. There are a number of unique features that set it apart from the competition.

The key differentiator between Greenroom, and other offerings like Spaces and Clubhouse, is that the live audio sessions are recorded by Spotify.

This allows users to turn their rooms into podcasts that can be listened to on-demand through Spotify at any time.

With this capability, Greenroom reduces the barrier to entry into podcasting to almost nothing. All that’s needed is a mic and a Spotify account and you’re good to go.

Live audio sessions are not recorded on other apps, which has gotten Clubhouse into hot water for moderation issues.

Another unique feature is a live text chat that users can participate in while listening to others speak.

This is similar to streams on YouTube and Twitch, where users can chat amongst each other while watching the live video feed.

Spotify is incentivising the use of Greenroom with the launch of a ‘Creator Fund’ that helps live audio creators get paid for their work.

The Creator Fund is scheduled to open this summer. Anyone who is interested can sign up in advance.

Greenroom will evolve as Spotify learns more about how creators and listeners use the app. New programming is said to be on the way which spans music, culture, and entertainment topics.

More features will be added later this summer. The app is currently available on iOS and Android in 135 markets around the world.

Though the app is available worldwide, it’s limited to English at the moment. Language options will expand over time.

Citation: If you would like to find out more about the source of this article – Spotify Gets Into Social Audio With Greenroom, see here.